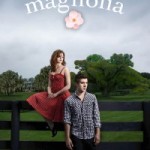 MAGNOLIA
Hardcover, Paperback, and eBook, Simon Pulse
Coming Aug. 2014
Find on Goodreads
In Magnolia Branch, Mississippi, the Cafferty and Marsden families are southern royalty. Neighbors since the Civil War, the families have shared vacations, holidays, backyard barbecues, and the overwhelming desire to unite their two clans by marriage. So when a baby boy and girl were born to the families at the same time, the perfect opportunity seemed to have finally arrived.
Jemma Cafferty and Ryder Marsden have no intention of giving in to their parents’ wishes. They’re only seventeen, for goodness’ sake, not to mention that one little problem: They hate each other! Jemma can’t stand Ryder’s nauseating golden-boy persona, and Ryder would like nothing better than to pretend stubborn Jemma doesn’t exist.
But when a violent storm ravages Magnolia Branch, it unearths Jemma’s and Ryder’s true feelings for each other as the two discover that the line between love and hate may be thin enough to risk crossing over. 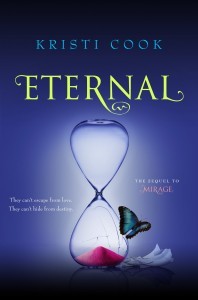 ETERNAL (Winterhaven #3)
Hardcover, $16.99 Simon Pulse, Sept. 2013
ISBN-13: 978-1442485327
Find on Goodreads
True love and destiny collide in the conclusion to the Haven trilogy, which Booklist called “a blend of the Gemma Doyle trilogy, the Twilight saga, and Lois Duncan’s thrillers.”
Forced to endure the violent punishment of the Tribunal for murders he has no recollection of committing, Aidan is slowly rotting away in a Paris dungeon. Violet is all but an unreachable dream to him now. But unlike Aidan, Violet has not given up hope as she works tirelessly with Matthew, her guardian and protector, to prove Aidan’s innocence and unravel the haunting vision that plagues her thoughts—the death of someone closest to her. Determined to set Aidan free, Violet discovers that a dangerous vampire war is brewing—and that Aidan may be at the center of it all. It’s only when the war reaches the doors of Winterhaven and tragedy strikes the school that Violet has to finally accept her fate. But that could mean losing Aidan—forever. With no other option, Violet must choose between true love and fulfilling her destiny…unless she can find a way to have them both. 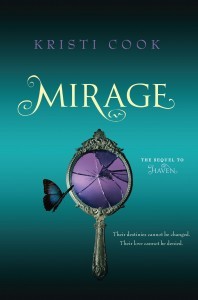 MIRAGE (Winterhaven #2)
Paperback, $9.99 Simon Pulse, June 1013
ISBN-13: 978-1442443006
Hardcover, $16.99 Simon Pulse, June 2012
ISBN-13: 978-1442442993
Find on Goodreads
Seventeen-year-old Violet McKenna is back for her senior year at Winterhaven, and thrilled to be with Aidan after a long summer apart. But when a violent and disturbing vision begins to haunt her, Violet suddenly feels unsure of everything: who to trust, if she is in danger, and—worst of all—whether she and Aidan are really meant to be together. 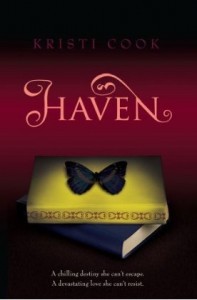 HAVEN (Winterhaven #1)
Hardcover, $16.99 Simon Pulse, Feb. 2011
ISBN: 978-1442407602
Paperback, $9.99 Simon Pulse, Jan. 2012
ISBN: 978-1442407619
On Goodreads
Read an excerpt
Violet McKenna isn’t a normal girl with normal teenage issues; she has more to contend with than most people could handle. Violet thought she was just crazy when she had a vivid vision of her dad’s murder. Her life started falling apart when her premonition came true. She’s had flashes of other events too–the problem was nobody believed her until she found a new school: Winterhaven.
At Winterhaven, Violet finally feels like she belongs. She quickly finds a close group friends and discovers that they too have psychic ‘gifts’—as do all the students at Winterhaven. But as soon as she feels settled she discovers the most intriguing and alluring boy she has ever met, and things quickly go awry. As the attraction between them grows, intense visions of the boy’s death start to haunt her. In her premonitions, the secret he is unwilling to share begins to reveal itself.
And to Violet’s horror, she learns that their destinies are intertwined in a critical–and deadly–way.
“Cook’s first YA novel reads like a blend of the Gemma Doyle trilogy, the Twilight saga, and Lois Duncan’s thrillers, and it will find a wide audience among female fans of gothic novels”
— Booklist